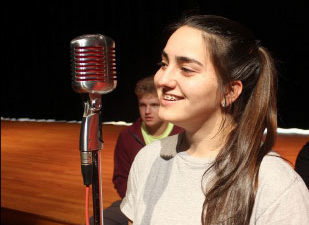 The pitter patter of feet. The sound of humming. Loud joyful tunes. Is this the sound of music in the making? Yes; it’s the sound of Cape Tech ‘s first-ever choral group: Technichoir.

Electrical lead teacher Mike Ready said the idea for a choir first arose near the end of the last school year. “I just happened to be talking to Ms. Altman-Sherman last year and she expressed an interest in leading the choir, however she accepted a position at Nantucket High School, and that left us with no choir once again,” Ready said, adding that he thought about the issue over the summer and spoke with Tamara Harper, education director at the Harwich Junior Theatre. “She offered the possibility of taking over the whole program, which to me sounded awesome.”

Cape Tech Principal William Terranova said Ready was the inspiration for developing the program, and praised him for bringing the idea forward in the first place.  ”He had a student who was interested in it.” Terranova said. “He did a lot of research to get it going. It is all a tribute to his work. Harper recommended singer and conductor Dana McCoy, who agreed to help out, and spent the next month and a half working with the dozen or so interested students. Cosmetology sophomore Hannah Dolan said she is learning more than singing as part of Technichoir. “I feel like I’m learning more and getting the experience more of being in a family together.” she said, ” It’s like we are united as one. “ Freshman Alyssa Bach agreed, adding that she is gaining more confidence in herself, a sentiment echoed by Culinary junior Bridget Chilinksi. “I have learned what it means to be a part of a group and part of something great.” she said. Information Technologies sophomore and guitarist Gabriel Sanborn said he enjoys being part of Technichoir.  “I feel I am not hiding when I’m in choir because I’m very shy when I sing in front of people.” he said. Mc Coy said she is enjoying working with the students.  “I am a veteran musician from New York City, and I couldn’t be more elated and proud of these guys here at this school. They wanted music and that to me is music to my ears, so I couldn’t think of anywhere I’d rather be.” she said. Terranova added that he sees many benefits to Technichoir.  “It’s a fabulous program that helps  students feel more involved and feel bigger than themselves, which is the ultimate  goal for every student activity,” he said.

After school program at the Wixon Innovation School. Students rehearse for The Jungle Book. Students perform in The Bluebird of Happiness as part of an outreach program at Monomoy Regional Middle School. The educational programming at CCTC|HJT is brought to you in part by Seaside LeMans, The Race for the Cape Cod Community and the Cape and Islands United Way.