Cape Cod Theatre Company/Harwich Junior Theatre, Inc. is Cape Cod’s premier multi-generational theater. Our commitment is to educate, empower and inspire students of all ages from all backgrounds to explore and expand their creative talents and aspirations, to experience and appreciate live theatre and to develop and nurture a life-long appreciation of the performing arts.

The origins of the Cape Cod Theatre Company/Harwich Junior Theatre are not unlike any well-loved fairy tale.

From its simple beginnings at the legendary Exchange Hall in Harwich Center to its current incarnation as a nationally recognized, year-round source of education and entertainment, our beloved theatre has always meant more than the sum of its productions. For thousands, it is “home,” brimming with creativity, collaboration, and a mutual love for live theatre.

Betty Bobp, our founder, was a respected drama teacher at Wheelock College in Boston. Her dream was to create a theatre that would provide opportunities for individuals of all ages to experience every aspect of the theatrical experience – from set and costume design, to playwriting, prop making, acting, and directing.

Betty set the cornerstone of her dream with the founding of the Harwich Junior Theatre organization in 1951 and secured space in Harwich Center’s historic four-story Exchange Hall – at the time, the tallest building on the Cape.

In the summer of 1952, along with a few volunteers, the new theatre mounted Cinderella, Tom Sawyer, and The Ghost of Mr. Penny at the Exchange Hall. Betty made the costumes, taught the students, built the sets, and directed the three shows on a budget of just $100. The organization’s following began to take hold, and a fourth summer production was added to the roster beginning in 1954.

In 1959, Harwich Junior Theatre was incorporated as a non-profit organization. During the 1960s, the theatre added an apprentice program and the Junior Players – a youth touring group. Both of these programs continue today.

In 1965, with the planned demolition of the Exchange Hall looming, Betty needed to find a new location for her theatre, and moved the organization to its current location in the former Ocean Hall on Division Street in West Harwich. Prior to that purchase, Ocean Hall had contained a first-floor public hall; its second story was occupied by Mount Horeb Lodge of Freemasons; and its third story was used as a dining room.

Around the same time, the theater also established a relationship with playwright Aurand Harris – its first of many artistic collaborations. Identified in the title of his biography as “America’s Most Produced Playwright for Young Audiences,” Harris summered in Harwich for many years, and worked with the theater, “directing and workshopping his latest plays for young audiences prior to publication.”1 Harris’ Rags to Riches premiered on the new Harwich Junior Theatre stage in 1966. 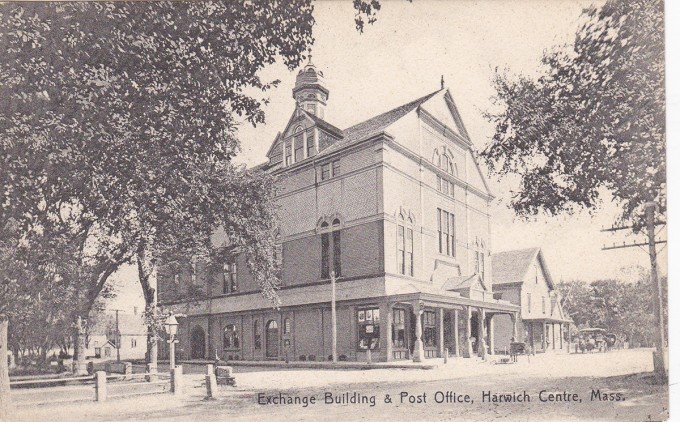 Photo of the old Exchange Hall Building in Harwich Center.

The Harwich Winter Theatre was established in 1970 by Harwich Junior Theatre alums Susan Kosoff, and Jane Staab, along with Anthony Hancock. It was the first of several efforts to extend the theatre productions into the off-season.

In the late 1970s, the Helikon Theatre was formed by Nina Schuessler and Sherrie and Philip Scudder. Helikon produced 10 shows in the 9 off-season months, while Betty’s Harwich Jr. Theatre productions continued to run during the summer months of June, July, and August.

During the 1980s, a front lobby, a rear two-story addition, a deck, and interior renovations provided significant improvements to the old building as the theatre transitioned into a year-round destination for live theatre and theatre arts education. Postcard of Ocean Hall, circ. 1911. Built in 1865 by Bartlett White of Yarmouth for a cost of about $7,000. Dennis Historical Society Archive.

Betty Bobp remained involved as an advisor into the 1990s. In 1996, Nina Schuessler was hired as the organization’s first full-time, year-round producing artistic director. Under her stewardship, the theatre has grown tremendously; still it maintains Betty’s vision for an inclusive community that teaches students of all ages to appreciate the performing arts, and demonstrates the transformational power of theatre – particularly for young children.

In 1997, the organization was presented with a regional award for excellence and achievement in theatre by the New England Theatre Conference. That same year, Betty passed away, just a few years shy of the organization’s 50thanniversary. Susan Kosoff (left) and Jane Staab (middle) present Betty Bobp (right), with an Honorary Degree from Wheelock College. Longtime Harwich Junior Theatre alums and protégé’s of Betty Bobp, Sue and Jane were professors at Wheelock College in Boston; co-founded Wheelock Family Theatre with Andi Genser in 1981; and ran it until their retirements in 2015. Today, both have returned to the Cape and work behind the scenes and onstage at CCTC directing productions, acting, playwriting, and continuing to mentor students of all ages.

In 2006, the organization signed a contract with the Town of Harwich to lease the building at 265 Sisson Road in Harwich Center. The building, now known as The Arts Center, expands the organization’s physical footprint and serves as rehearsal and classroom space, and hosts small-scale touring productions, open mic coffee houses, and experimental theatre.

In 2012, the Arts Foundation of Cape Cod presented Nina with its Lifetime Achievement in the Arts Award for her contributions to the organization and the Cape community through her tremendous work with the theatre. During her tenure with the organization, Nina has produced and/or directed more than 200 plays and musicals, including 20 new scripts by playwrights in residence.

In August of 2015, the organization officially changed its name to the Cape Cod Theatre Company/Harwich Junior Theatre. The change was significant in that it reflected the evolution of the organization from a small, seasonal venture to the pioneering force that it is today as a year-round center for theatre arts education and outreach – and a semi-professional theatre that mounts 10 full-scale productions each year for audiences of more than 20,000. The new name intentionally maintains the reference to its significant Harwich Junior Theatre roots and history.

The organization’s current staff of three full-time and one part-time employees, along with an active and involved Board of Directors work to ensure that the theatre continues to adhere to its mission and social responsibilities as it embraces a bright future.

Seasoned theatre professionals and members of the Actors’ Equity Association regularly staff our productions and classrooms with credentials of talent and experience in specific aspects of theatre – including directing; acting; choreography; sound, lighting, and set design; playwriting; and music.

Many of our family members have transformed their experience here into careers in the arts – some working behind the scenes, some becoming familiar faces on Broadway, the big screen, and on television. Others have applied the confidence and skills they gained at the Cape Cod Theatre Company to highly successful careers in business, as teachers, and in government.

Now generations into Betty’s wonderful dream, our theatre is more vital and vibrant than ever. It is alive with creators and creativity. Actors and audiences. Learning and mentoring. Camaraderie and friendships. It truly is a place for people of all ages to stage their dreams.